This page presents information on the safety of rural, low-volume roads and on research that supports the use of ELRs to improve their safety.

Two significant problems exist on rural, low-volume roads which are addressable with the use of edge lane roads.             Rates for this crash type drop significantly with wider shoulders and ELRs provide wide shoulders without the expense of physical widening.             ELRs provide facilities for vulnerable road users at low cost.
TELL ME MORE ABOUT THIS PROJECT!
Rural ABL Project
Problem Description
Background
According to 2016 FHWA statistics, rural areas are home to 1.63 million of the 2.75 million miles of paved roads in the US. 1.37 million of those rural road-miles consist of local and collector roads.

These roads are typically the only connections between small towns and outlying homes but many have no sidewalks or useable shoulders. Vulnerable road users (VRUs) are forced to use the travel lanes which is both dangerous and intimidating. Without billions of dollars of funding, these roads are likely to continue without substantial improvement for decades or longer.

In addition, these roads have a unique safety profile. Due to their low volumes and physical setting, over half of all crashes, about 56%, are single-vehicle, run-off-the-road crashes. Rates for these crash types drop significantly with added lane or shoulder width.

These two problems appear to be addressable with the use of ELRs. Questions To Answer
This project is an effort to research the possibility of, and create design guidance for, the application of ELRs to these roads. The two questions this project needs to answer are:
The first question is best answered by research into existing domestic and international practices (primarily Great Britain and Australia where this treatment is already used), review of findings from the literature and prospective research based on computer simulations and extrapolations from human factors and safety statistics.

The answer to the second question will be informed by answers to the first question, a review of ELR best practices and an approach of creating guidance which targets early successes rather than creating as broad an applicable domain as possible.

Problem Space Description
The roads targeted by this investigation are assumed to have the following characteristics: Solution Requirements
While this project is only investigating ELRs as a possible solution, any solution should have at least the following characteristics: Philosophy
Guidance for Rural ELRs is not a declaration that protection is unnecessary or unwanted on rural, low-volume roads. It is an acknowledgement that sufficient resources to provide safe, comfortable facilities on all roads in the near future are not available but that near-term improvement of those roads is still desired.

MORE DETAIL
ELRs to make Rural Roads Safer
The Problem How can ELRs Help?
The ELR format provides wide shoulders at little cost. On 2-lane roads with 20-32’ of pavement, ELRs provide 5-6’ of additional shoulder width.  But will this increase head-on collisions?
No direct evidence exists to answer this question. Some less-direct evidence suggests that this will not be a problem. Summary
The existing evidence appears to predict that ELRs on these rural roads will significantly improve safety. But more research is needed.

GRIFFIN, L.I. and MAK, K.K., "Benefits to be Achieved from Widening Rural, Two-Lane, Farm-to-Market Roads in Texas." Paper Presented at the 1988 Annual Transportation Research Board Meeting.This study looked at 36,215 miles of rural Texas roads with 1500 ADT or less. NCHRP 362 claims that the crash reduction rates for lane widening produced by Griffin and Mak are very similar to those produced by Zegeer, 1987.
Independent confirmation of results in 1987 Zegeer study.

Many rural 2-lane roads have narrow lanes and little to no shoulder
Per NCHRP Report 362, “over one-quarter of the mileage of such roads have lane widths of 9 ft or less, and two-thirds have shoulder widths of 4 ft or less. In addition, 11.5 percent of two-lane highway mileage (356,500 miles) have no shoulders. ” Doing the math over 3.1 million miles tells us that over 775,000 miles have lane widths of <= 9’ and 2.07 million miles have shoulders <= 4’ width.

Australia ELR Example
Bunya Mountains Road in Alice Creek, Queensland uses an ELR format with unpaved outside lanes. This is an example of an Australian Class 5B rural road which consists of pavement one lane in width and hard gravel shoulders on both sides. Cars drive on the paved lane until an  oncoming car arrives. Both vehicles use the gravel shoulders to pass, then return to the paved lane after passing.
Posted speed limit and traffic volume unknown, approximately 13’ wide.
​Location: -26.770399, 151.586055. 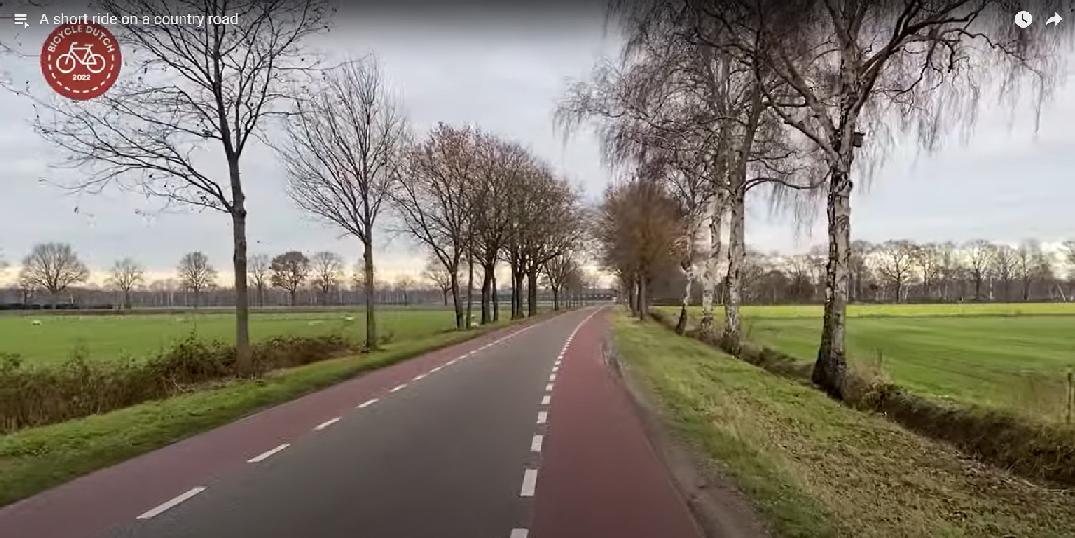 A short video of a ride on a Dutch country road. Note the "shoulders" that wouldn't exist on a two lane road and the widening of the clear zone for motorists traveling in the center lane.
Photos courtesy of Richard Sparks.